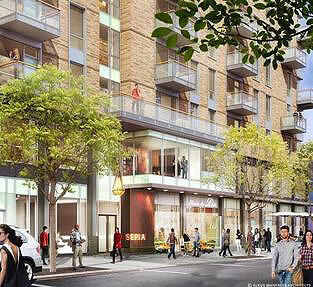 #BostonLuxuryCondos#BostonRealEstateThe new and much anticipated South End condo buildingknown as SEPIA opened for residency in fall of 2015. It setsomenew standards for Boston luxury real estate, at least in the South End neighborhood.Anchoring one corner ofthemassive INK BLOCKproject, the building sits at the intersection of Harrison Avenue and Albany Street. The building's83 condos pre-sold quickly, and a few hit the market again almost as soon as they closed.The INK BLOCK siteholds three new high-end rental apartment buildings, in addition tothe largest Whole Foods Market in Boston.Construction of an additionalluxury condo building, known as SIENNA, has also begun on the block.The SEPIA building was named in recognition of the site's history as the former home of the Boston Herald. Sepia is a red-brown tone once commonly used in photography, and currently still used to give the effect of aged photographs. (SIENNA is also abrownpigment, but historically used in painting.)Kitchens at SEPIA havewhite quartz counters, modern cabinets, floor-to-ceiling windows, luxurious bathrooms, hardwood floors, and in-unit laundry.Amenities abound here, with such features as a concierge, rooftop pool, sundeck, garage parking, clubroom, and a dog grooming club.Pre-construction prices for SIENNA condos are at about$1,000per square foot.Here's an example of a 2 bedroom SEPIA condo for sale.More about the SEPIA luxury condo building.If you'd like to see this SEPIA condo, or would like to know more about buying or selling Boston condos or homes, pleasecall me at